In the Next Industrial Revolution, Atoms Are the New Bits 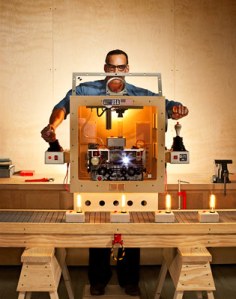 In an age of open source, custom-fabricated, DIY product design, all you need to conquer the world is a brilliant idea.
Photo: Dan WintersThe door of a dry-cleaner-size storefront in an industrial park in Wareham, Massachusetts, an hour south of Boston, might not look like a portal to the future of American manufacturing, but it is. This is the headquarters of Local Motors, the first open source car company to reach production. Step inside and the office reveals itself as a mind-blowing example of the power of micro-factories.

In June, Local Motors will officially release the Rally Fighter, a $50,000 off-road (but street-legal) racer. The design was crowdsourced, as was the selection of mostly off-the-shelf components, and the final assembly will be done by the customers themselves in local assembly centers as part of a “build experience.” Several more designs are in the pipeline, and the company says it can take a new vehicle from sketch to market in 18 months, about the time it takes Detroit to change the specs on some door trim. Each design is released under a share-friendly Creative Commons license, and customers are encouraged to enhance the designs and produce their own components that they can sell to their peers.

The Rally Fighter was prototyped in the workshop at the back of the Wareham office, but manufacturing muscle also came from Factory Five Racing, a kit-car company and Local Motors investor located just down the road. Of course, the kit-car business has been around for decades, standing as a proof of concept for how small manufacturing can work in the car industry. Kit cars combine hand-welded steel tube chassis and fiberglass bodies with stock engines and accessories. Amateurs assemble the cars at their homes, which exempts the vehicles from many regulatory restrictions (similar to home-built experimental aircraft). Factory Five has sold about 8,000 kits to date.

One problem with the kit-car business, though, is that the vehicles are typically modeled after famous racing and sports cars, making lawsuits and license fees a constant burden. This makes it hard to profit and limits the industry’s growth, even in the face of the DIY boom.

Jay Rogers, CEO of Local Motors, saw a way around this. His company opted for totally original designs: They don’t evoke classic cars but rather reimagine what a car can be. The Rally Fighter’s body was designed by Local Motors’ community of volunteers and puts the lie to the notion that you can’t create anything good by committee (so long as the community is well managed, well led, and well equipped with tools like 3-D design software and photorealistic rendering technology). The result is a car that puts Detroit to shame.

It is, first of all, incredibly cool-looking — a cross between a Baja racer and a P-51 Mustang fighter plane. Given its community provenance, one might have expected something more like a platypus. But this process was no politburo. Instead, it was a competition. The winner was Sangho Kim, a 30-year-old graphic artist and student at the Art Center College of Design in Pasadena, California. When Local Motors asked its community to submit ideas for next-gen vehicles, Kim’s sketches and renderings captivated the crowd. There wasn’t supposed to be a prize, but the company gave Kim $10,000 anyway. As the community coalesced around his Rally Fighter, members competed to develop secondary parts, from the side vents to the light bar. Some were designers, some engineers, and others just car hobbyists. But what they had in common was a refusal to design just another car, compromised by mass-market needs and convention. They wanted to make something original — a fantasy car come to life.

While the community crafted the exterior, Local Motors designed or selected the chassis, engine, and transmission thanks to relationships with companies like Penske Automotive Group, which helped the firm source everything from dashboard dials to the new BMW clean diesel engine the Rally Fighter will use. This combination — have the pros handle the elements that are critical to performance, safety, and manufacturability while the community designs the parts that give the car its shape and style — allows crowdsourcing to work even for a product whose use has life-and-death implications.

Local Motors plans to release between 500 and 2,000 units of each model. It’s a niche vehicle; it won’t compete with the major automakers but rather fill in the gaps in the marketplace for unique designs. Rogers uses the analogy of a jar of marbles, each of which represents a vehicle from a major automaker. In between the marbles is empty space, space that can be filled with grains of sand — and those grains are Local Motors cars.

Local Motors has just 10 full-time employees (that number will grow to more than 50 as it opens build centers, the first of which will be in Phoenix), holds almost no inventory, and purchases components and prepares kits only after buyers have made a down payment and reserved a build date

This entry was posted on Monday, April 19th, 2010 at 15:40 and is filed under Business / Economy, Design, Innovation. You can follow any responses to this entry through the RSS 2.0 feed. You can leave a response, or trackback from your own site.