How Big Data Is Playing Recruiter for Specialized Workers

WHEN the e-mail came out of the blue last summer, offering a shot as a programmer at a San Francisco start-up, Jade Dominguez, 26, was living off credit card debt in a rental in South Pasadena, Calif., while he taught himself programming. He had been an average student in high school and hadn’t bothered with college, but someone, somewhere out there in the cloud, thought that he might be brilliant, or at least a diamond in the rough.

That someone was Luca Bonmassar. He had discovered Mr. Dominguez by using a technology that raises important questions about how people are recruited and hired, and whether great talent is being overlooked along the way. The concept is to focus less than recruiters might on traditional talent markers — a degree from M.I.T., a previous job at Google, a recommendation from a friend or colleague — and more on simple notions: How well does the person perform? What can the person do? And can it be quantified?

The technology is the product of Gild, the 18-month-old start-up company of which Mr. Bonmassar is a co-founder. His is one of a handful of young businesses aiming to automate the discovery of talented programmers — a group that is in enormous demand. These efforts fall in the category of Big Data, using computers to gather and crunch all kinds of information to perform many tasks, whether recommending books, putting targeted ads onto Web sites or predicting health care outcomes or stock prices. END_OF_DOCUMENT_TOKEN_TO_BE_REPLACED

The Rise of Big Data 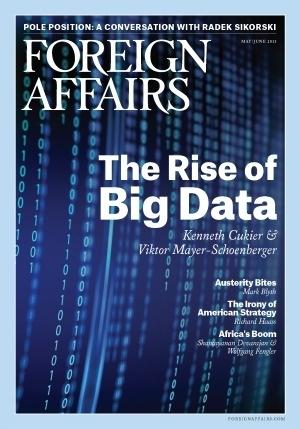 How It’s Changing the Way We Think About the World

Everyone knows that the Internet has changed how businesses operate, governments function, and people live. But a new, less visible technological trend is just as transformative: “big data.” Big data starts with the fact that there is a lot more information floating around these days than ever before, and it is being put to extraordinary new uses. Big data is distinct from the Internet, although the Web makes it much easier to collect and share data. Big data is about more than just communication: the idea is that we can learn from a large body of information things that we could not comprehend when we used only smaller amounts.

In the third century BC, the Library of Alexandria was believed to house the sum of human knowledge. Today, there is enough information in the world to give every person alive 320 times as much of it as historians think was stored in Alexandria’s entire collection — an estimated 1,200 exabytes’ worth. If all this information were placed on CDs and they were stacked up, the CDs would form five separate piles that would all reach to the moon. END_OF_DOCUMENT_TOKEN_TO_BE_REPLACED

The risks associated with major IT projects are being vastly underestimated, according to the largest study of global IT projects ever undertaken.

Back in 2003, the US clothing manufacturer Levi Strauss made the fateful decision to upgrade its global IT system. The project was budgeted at $5million and the advantages appeared huge.

As Levi Strauss had grown into a global company, its IT system had become fragmented and antiquated, with different systems in operation in different countries. So switching to a single integrated system seemed eminently sensible. “But very quickly all hell broke loose,” say Bent Flyvbjerg and Alexander Budzier at the University of Oxford in the UK.

For example, the supermarket giant Walmart, one of its biggest customers, demanded that the new IT system connect seamlessly with its own supply chain management system. That created an entirely unanticipated set of problems. END_OF_DOCUMENT_TOKEN_TO_BE_REPLACED

THE problem with human-resource managers is that they are human. They have biases; they make mistakes. But with better tools, they can make better hiring decisions, say advocates of “big data”. Software that crunches piles of information can spot things that may not be apparent to the naked eye. In the case of hiring American workers who toil by the hour, number-crunching has uncovered some surprising correlations.

For instance, people who fill out online job applications using browsers that did not come with the computer (such as Microsoft’s Internet Explorer on a Windows PC) but had to be deliberately installed (like Firefox or Google’s Chrome) perform better and change jobs less often.

It could just be coincidence, but some analysts think that people who bother to install a new browser may be the sort who take the time to reach informed decisions. Such people should be better employees. Evolv, a company that monitors recruitment and workplace data, pored over nearly 3m data points from more than 30,000 employees to find this nugget.

Some 60% of American workers earn hourly wages. Of these, about half change jobs each year. So firms that employ lots of unskilled workers, such as supermarkets and fast-food chains, have to vet heaps—sometimes millions—of applications every year. Making the process more efficient could yield big payoffs. END_OF_DOCUMENT_TOKEN_TO_BE_REPLACED