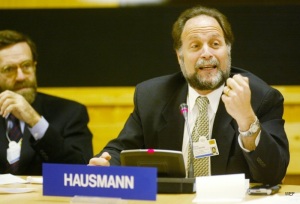 Ricardo Hausmann, a former minister of planning of Venezuela and former Chief Economist of the Inter-American Development Bank, is a professor of economics at Harvard University, where he is also Director of the Center for International Development.

CAMBRIDGE – Some ideas are intuitive. Others sound so obvious after they are expressed that it is hard to deny their truth. They are powerful, because they have many nonobvious implications. They put one in a different frame of mind when looking at the world and deciding how to act on it.

One such idea is the notion that cities, regions, and countries should specialize. Because they cannot be good at everything, they must concentrate on what they are best at – that is, on their comparative advantage. They should make a few things very well and exchange them for other goods that are made better elsewhere, thus exploiting the gains from trade. END_OF_DOCUMENT_TOKEN_TO_BE_REPLACED

The shared genius of Elon Musk and Steve Jobs

Businessperson of the Year 2013

Yes, these two iconoclasts have disrupted multiple industries, but TED curator Chris Anderson goes much deeper and argues that what Musk and Jobs really have in common is a rare form of design thinking powered by unfettered conviction.

When future historians report human progress during the 21st century, they may conclude that one of the key moments took place a year ago in Elon Musk’s bedroom. His eureka! moments happen every few months. Sometimes during his morning shower, sometimes late at night before sleep, sometimes, as on this occasion, waking at 2 a.m.

This is how he described that moment to me: “I realized that a methane-oxygen rocket engine could achieve a specific impulse greater than 380.”

Okay, it doesn’t sound particularly historic. Until you realize that a rocket of that spec has adequate range to escape Earth’s upper atmosphere and travel to Mars. And that it so happens that Mars has plenty of carbon dioxide (CO2) and permafrost (H2O), which could be neatly converted into the aforementioned methane (CH4) and liquid oxygen (O2). Which means you could create the fuel for the journey home right there on Mars itself. And that transforms the long-term economics of space travel between Earth and Mars because it means that you could send manned spacecraft to Mars without having to carry rocket fuel with you.

That’s right. Elon Musk genuinely believes that within the next couple of decades, humans will be colonizing Mars. And thanks to his early morning aha! moment, we will even be able to make the return trip. That would certainly be a useful line in the recruiting ads, unless, like him, you’re comfortable with the prospect of dying on Mars after helping build humanity’s second home.

This is not your typical CEO. END_OF_DOCUMENT_TOKEN_TO_BE_REPLACED