What Satya Nadella did at Microsoft

The world’s biggest software firm has transformed its culture for the better. But getting cloud computing right is hard

A DECADE ago, visiting Microsoft’s headquarters near Seattle was like a trip into enemy territory. Executives would not so much talk with visitors as fire words at them (one of this newspaper’s correspondents has yet to recover from two harrowing days spent in the company of a Microsoft “brand evangelist”). If challenged on the corporate message, their body language would betray what they were thinking and what Bill Gates, the firm’s founder, used often to say: “That’s the stupidest fucking thing I’ve ever heard.” 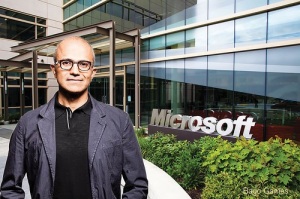 Today the mood at Microsoft’s campus, a sprawling collection of more than 100 buildings, is strikingly different. The word-count per minute is much lower. Questions, however ignorant or critical, are answered patiently. The firm’s boss, Satya Nadella (pictured), strikes a different and gentler tone from Mr Gates and Steve Ballmer, his immediate predecessor (although he, too, has a highly competitive side).

Both these descriptions are caricatures. But they point to an underlying truth: how radically the world’s biggest software firm has changed in the short time since Mr Nadella took charge in early 2014. Back then everything at Microsoft revolved around Windows, the operating system that powered most computers. It was a franchise the company believed needed to be extended and defended at almost any price.

Windows has since retreated into a supporting role; sometimes it is little more than a loss-leader to push other products. At the heart of the new Microsoft is Azure, a global computing cloud. It is formed of more than 100 data centres around the world, dishing up web-based applications, bringing mobile devices to life and crunching data for artificial-intelligence (AI) services. Along with this shift in strategy has come a less abrasive, more open culture.

Microsoft’s transformation is far from complete. Windows, Office—the once equally dominant package of applications for personal computers—and other PC-related products together still generate about two-fifths of its revenues and three-quarters of its profits. But even those who have watched Mr Nadella’s actions with a high degree of scepticism reckon the firm is moving on from its cash-cows.

The firm’s transformation did not begin with Mr Nadella. It launched Azure and started to rewrite its software for the cloud under Mr Ballmer. But Mr Nadella has given Microsoft a new Gestalt, or personality, that investors appear to like. The firm’s share price has nearly doubled since he took over (see chart).

Dethroning Windows was the first task. Previously, new products were held back or shorn of certain features if these were thought to hurt the program (something known internally as the “strategy tax”). One of Mr Nadella’s early decisions was to allow Office to run on mobile devices that use competing operating systems. He went so far as to use a slide that read “Microsoft loves Linux”. Mr Ballmer had called the open-source operating system a “cancer”.

The downgrading of Windows made it easier for Mr Nadella to change the firm’s culture—which is so important, he believes (along with Peter Drucker), that it “eats strategy for breakfast”. Technologies come and go, he says, so “we need a culture that allows you to constantly renew yourself”. Whereas Mr Ballmer was known for running across the stage and yelling “I love this company”, Mr Nadella can often be seen sitting in the audience, listening. When, in 2016, internet trolls manipulated Tay, one of Microsoft’s AI-powered online bots, into spewing racist comments, people waited for heads to roll. Mr Nadella sent around an e-mail saying “Keep pushing, and know that I am with you…(the) key is to keep learning and improving.”

Employees are no longer assessed on a curve, with those ending up at the lower end often getting no bonus or promotion. For the firm’s annual executive retreat in 2015, Mr Nadella included the heads of companies Microsoft had recently acquired, such as Mojang, the maker of Minecraft, a video game, and Acompli, an e-mail app, breaking with the tradition that only longtime executives can attend.

The book of Nadella
Sending such signals matters more than ever in the tech industry. Well-regarded firms find it easier to recruit top-notch talent, which is highly mobile and has its pick of employers. A reputation for aggression can attract the attention of regulators and lead to a public backlash, as Microsoft itself knows from experience and Uber, a ride-hailing unicorn, is finding out.

Mr Nadella has changed the firm’s organisation as well as its culture. It is now more of a vertically integrated technology firm—“full stack”, in the jargon. It not only writes all kinds of software, but builds its own data centres and designs its own hardware. Mr Nadella points out that it now even develops some of the chips for its data centres.

His imprint can be seen on three businesses in particular: the cloud, hardware and AI. Microsoft does not break out by how much it has increased investment in the cloud, but building data centres is expensive and its capital expenditure is soon expected nearly to double, to $9bn a year, from when Mr Nadella took over. If you take only basic services, such as data storage and computing, Microsoft’s cloud is much smaller than Amazon Web Services, the leader in cloud computing, which is owned by Amazon, an e-commerce giant. But if you add Microsoft’s web-based services, such as Office 365 and other business applications, which are only a negligible part of AWS’s portfolio, the two firms are of comparable size. Both AWS’s and Microsoft’s cloud businesses boast an annual run rate (the latest quarterly revenues multiplied by four) of $14bn. Microsoft hopes to reach $20bn by its 2018 financial year, a fifth of total expected revenues.

In terms of scale, then, there has been much progress. Yet in stark contrast to AWS, which supplies the bulk of Amazon’s profits, Azure is still loss-making. Some analysts are optimistic that this could change. Mark Moerdler of Sanford C. Bernstein, a research firm, thinks that once Microsoft tapers its investments in data centres and their utilisation goes up, it could approach the margins enjoyed by AWS, which reached more than 30% in the last quarter.

Scott Guthrie, who heads Azure, admits that the margins for cloud-based services will probably be lower than for conventional software. But when applications are delivered online, he points out, Microsoft can capture a bigger slice of the overall pie. As well as offering its existing software as services in the cloud, it also takes care of components of IT systems, such as storage and networking, that used to be provided by other vendors. The firm’s addressable market is far bigger, he says.

Perhaps. But however well Microsoft performs, life in the cloud will always be far tougher than it was in the realm of personal computers, argues David Mitchell Smith of Gartner, a consultancy. Microsoft will not only have to compete with Amazon, but with Google, which intends to go after business customers.

Although the cloud is the core of the new Microsoft, hardware is another important bet. The firm has shed its ailing mobile-phone division, which it had bought from Nokia, but on its campus in Redmond hundreds of employees are busy developing new devices. Its prototyping lab offers all that a designer of mobile gadgets could want, such as 3D printers to churn out overnight new models of a hinge, for example, or machines to cut the housing of a new laptop from a block of aluminium.

“Failing faster” is the purpose of the new equipment, says Panos Panay, who is in charge of Microsoft’s hardware business. Designers can test ideas more quickly in pursuit of the firm’s goal to develop new categories of product. Hardware, software and online services are meant to be bundled into a single product to create what the firm gratingly calls an “experience”.

One example is the Surface Book, a high-end laptop. It features a detachable screen which doubles as a computing tablet—a combination that has already found a following, and according to some, offers better value than comparable laptops from Apple. More daring still is HoloLens, an augmented-reality device in the form of a wireless head-mounted display. It is capable of mixing “real” and virtual reality for business purposes—for example, by projecting new parts on a motorcycle frame so a designer can easily see what works. (It is currently only available for developers.)

HoloLens, its designers hope, will also be a device where people use artificial-intelligence services—Mr Nadella’s third big bet. In September Microsoft formed a new AI unit, combining all its efforts in the field, including its basic-research group of more than 1,000 people and the engineering team behind Bing, its search engine.

Every single business application is going to be disrupted by AI, says Harry Shum, who is in charge of the new unit. Algorithms trained by reams of data could tell sales staff which leads to spend most time on, and help identify risky deals where, for instance, the customer might not fulfil contract terms. This, he explains, is also a big reason why Microsoft spent a whopping $26bn to buy LinkedIn, a professional social network that has 467m users. The deal adds to the data the firm needs to train its new AI applications.

AI is a growing part of Azure, too. In recent months Microsoft has introduced two dozen “cognitive services” to Azure. Some understand language and can identify individual speakers, others recognise faces and can tap into academic knowledge. The idea is for other firms to be able to use these offerings to make their own products smarter, thus “democratising AI”. Schneider Electric, which makes gear to manage energy systems, for instance, uses some of Microsoft’s AI services to monitor its equipment.

It is easy to be impressed by what Mr Nadella has achieved in only three years. But it is far from certain that his technology bets will play out as planned. To run a computing cloud profitably you need hyper-efficient operations; something that Amazon, in contrast to Microsoft, has grown up with. Although Microsoft has expertise in AI, others, such as Google and IBM, got a far earlier start. Nor is designing integrated devices part of Microsoft’s DNA in the way it is for Apple. Augmented reality is an extremely promising field but HoloLens may turn out to be no more than an expensive toy for developers.

Success or failure in the new areas will of course continue to be cushioned for some time by the revenues and profits from Windows and Office. Yet there, too, lie risks. If the PC market, whose secular decline has slowed since last year, take another turn for the worse, the company’s finances would suffer badly, warns John DiFucci of Jefferies, an investment bank.

Mr Nadella doesn’t seem to be worried by such unknowns, which are to be expected in a fast-changing industry. Instead, he frets about too much success. “When you have a core that’s growing at more than 20%, that is when the rot really sets in,” he says. It remains to be seen whether or not the firm can ever again achieve such velocity. For now, though, its share price is showing plenty of speed.

This entry was posted on Friday, March 17th, 2017 at 16:24 and is filed under Business / Economy, Information Management & Technology. You can follow any responses to this entry through the RSS 2.0 feed. You can leave a response, or trackback from your own site.