IBM’s Growth Comes at a Cost

Even for IBM , growth doesn’t quite solve everything. 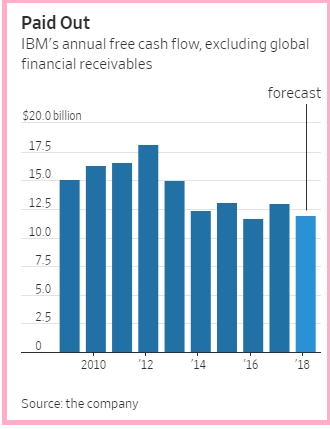 Still, IBM’s shares fell Friday, much like they have done following 10 of its last 12 quarterly reports. A bit of growth, as it turns out, isn’t quite enough to assuage concerns about how the company gets there. Fourth-quarter gross margins slipped below the 50% line for the first time in five years for what is typically the company’s strongest seasonal period. And, while IBM did project annual revenue growth for 2018, it is unclear if the company can do that without continued help from favorable exchange rates.

Given that IBM’s stock had jumped more than 15% since its last quarterly report, some disappointment was bound to set in. The company also expects a slight drop in free cash flow in 2018 due to increased capital spending in key segments to drive future growth. IBM did manage to close 2017 with a small gain in adjusted per-share earnings of $13.80 after three years of declines. But the company also projected flat earnings for 2018, given its need to invest more in its business.

Those investments have borne some fruit. The “strategic imperatives” IBM has been so focused on for the last few years accounted for 46% of total revenue for 2017, compared to 41% the year before. While encouraging, for an overall business that has been in steady decline for the last six years, investors are now willing to take only so much on faith.

This entry was posted on Tuesday, January 23rd, 2018 at 15:39 and is filed under Business / Economy, Information Management & Technology. You can follow any responses to this entry through the RSS 2.0 feed. You can leave a response, or trackback from your own site.