The Google Formula for Success

Can Google’s winning ways be applied to all kinds of businesses? The authors of “How Google Works,” Eric Schmidt, Google’s former chief executive, and Jonathan Rosenberg, a former senior product manager at Google, firmly believe that they can.

“How Google Works” is filled with instructive anecdotes of Google lore.

The critical ingredient, they argue in their new book, is to build teams, companies and corporate cultures around people they call “smart creatives.” These are digital-age descendants of yesterday’s “knowledge workers,” a term coined in 1959 by Peter Drucker, the famed management theorist.

But the new breed is a far cry from the staid, organization men of the past. Smart creatives, the authors write, are impatient, outspoken risk-takers who are easily bored and change jobs frequently. They are intellectually versatile, typically “combining technical depth with business savvy and creative flair,” the authors note.

“They are a new kind of animal,” Mr. Schmidt and Mr. Rosenberg write. “And they are the key to achieving success in the Internet Century.”

Their book, written with Alan Eagle, a speechwriter and communications employee at Google, is filled with instructive anecdotes of Google lore. One early story, from 2002, is presented as a distillation of Google’s distinctive culture. Larry Page, the co-founder, was chagrined at how terrible the ads were that were being served up alongside many searches — random and irrelevant. He printed out the searches with the offending ads, marked them, and wrote on top, “THESE ADS” STINK. He pinned the pages to a bulletin board in the company kitchen, and left for the weekend.

Five engineers worked on the ad program over the weekend, without any direct prompting, and solved the problem. That became the essence of Google’s “ad relevance score,” which presented search-related ads based on their relevance rather than how much the advertiser was willing to pay or how many clicks the ads received. The five “problem-solving ninjas,” the authors write, were not even on the Google ads team.

The look of a leader 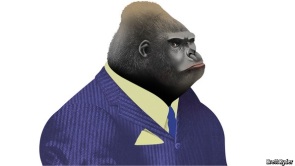 IN GORILLA society, power belongs to silverback males. These splendid creatures have numerous status markers besides their back hair: they are bigger than the rest of their band, strike space-filling postures, produce deeper sounds, thump their chests lustily and, in general, exude an air of physical fitness. Things are not that different in the corporate world. The typical chief executive is more than six feet tall, has a deep voice, a good posture, a touch of grey in his thick, lustrous hair and, for his age, a fit body. Bosses spread themselves out behind their large desks. They stand tall when talking to subordinates. Their conversation is laden with prestige pauses and declarative statements.

The big difference between gorillas and humans is, of course, that human society changes rapidly. The past few decades have seen a striking change in the distribution of power—between men and women, the West and the emerging world and geeks and non-geeks. Women run some of America’s largest firms, such as General Motors (Mary Barra) and IBM (Virginia Rometty). More than half of the world’s biggest 2,500 public companies have their headquarters outside the West. Geeks barely out of short trousers run some of the world’s most dynamic businesses. Peter Thiel, one of Silicon Valley’s leading investors, has introduced a blanket rule: never invest in a CEO who wears a suit.

Yet it is remarkable, in this supposed age of diversity, how many bosses still conform to the stereotype. First, they are tall: in research for his 2005 book, “Blink”, Malcolm Gladwell found that 30% of CEOs of Fortune 500 companies are 6 feet 2 inches or taller, compared with 3.9% of the American population. END_OF_DOCUMENT_TOKEN_TO_BE_REPLACED

How Network Theory Is Revealing Previously Unknown Patterns in Sport

Analysing the network of passes between soccer players reveals that one of the world’s most successful teams plays an entirely different type of football to every other soccer team on the planet. 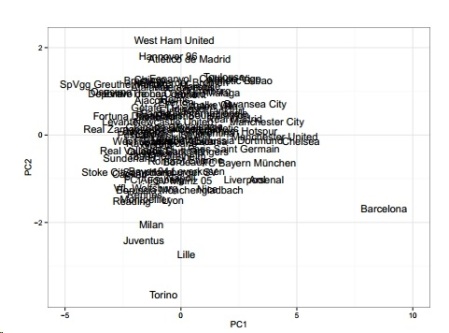 If you’ve ever watched soccer, you’ll know of the subtle differences in tactics and formation between different teams. There is the long ball game, the pressing game, the zone defence and so on. Many teams have particular styles of play that fans admire and hate.

Innovations are common, with teams constantly adopting or abandoning new tactics. And given the international nature of football, new ideas spread rapidly, as players and coaches move from one team and country to another.

So it’s easy to imagine that it’s hard to play a truly unique brand of football, using tactics and skills that no other team copies.

That’s not quite true, say Laszlo Gyarmati at the Qatar Computing Research Institute and a few pals. These guys have used a network theory approach to characterise the play of all the top teams in Spain, Germany, Italy, France and England. And they say this metric reveals that while many teams share similar styles of play, one team stands out as truly unique, playing a style of football that no other team can match.

Football aficionados won’t be surprised to learn that that side is the Spanish team FC Barcelona, one of the most successful soccer teams on the planet. Barcelona have pioneered a type of football called tiki-taka that no other team has been able to master (with the notable exception of the Spanish national side, which generally has a large contingent of Barca players in its ranks).

Tiki-taka is characterised by rapid short passes and fast movement by the players. The idea is to dominate possession of the ball. That’s in sharp contrast to conventional tactics that focus on player formations. END_OF_DOCUMENT_TOKEN_TO_BE_REPLACED

Chinese management ideas are beginning to get the attention they deserve

MANAGEMENT thinkers have paid surprisingly little attention to how Chinese firms are run. They routinely ascribe those firms’ rapid growth in recent years to their copious supply of cheap labour, or to generous financial backing from the state, rather than inventiveness. They have much more time for India, particularly its knack for frugal innovation, with all those colourful stories of banks putting cash machines on bikes and taking them into the countryside, and companies building water purifiers out of coconut husks.

However, it seems unlikely that China’s companies have come as far as they have just by applying lots of labour and capital. It is also hard to imagine that the huge expansion of China’s education system and its technology industries is not producing fresh management thinking. Western companies knew little about Japan’s system of lean production until its carmakers gobbled up their markets. The danger is that the same will happen with Chinese management ideas.

There are, however, signs that these are now getting the attention they deserve. The MIT Sloan Management Review devotes much of its current issue to examining innovation and management lessons from China. Peter Williamson and Eden Yin of Cambridge University’s Judge Business School contribute a fascinating essay on “Accelerated Innovation: the New Challenge from China”. The latest issue of the Harvard Business Review has a piece on “A Chinese Approach to Management” by Thomas Hout of the Monterey Institute of International Studies and David Michael of the Boston Consulting Group. END_OF_DOCUMENT_TOKEN_TO_BE_REPLACED